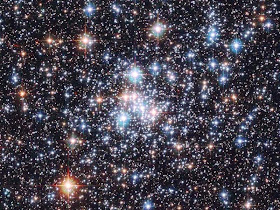 It is in Gen. 1:1, not Gen. 1:16, where it describes the stars being physically created. In Gen. 1:1, it
says that "God created the heavens and earth". There is nothing to indicate that billions of years could not have passed between that statement and the next sentence in Gen. 1:2. So “the heavens” (which includes the stars) were most likely created long before the first "day” even began.

Also the Hebrew word rendered “make” in verse 16 is not the same as the word for “create” used in Genesis chapter 1, verses 1, 21, and 27. So when verse 16 says that "He also made the stars", it does not mean that He actually created them at that time. But what does it mean?

The events of the six figurative creative “days,” or time periods of special creative works, seem to have been described as they would have appeared to a human observer had he been present on the earth then. So even though “the heavens” (which includes the stars) were created long before the “first day” even began, their light did not reach the surface of the earth, presumably due to dense layers of cloud cover. During the fourth "day" (creative period), however, a notable change took place. The sun, the moon, and the stars were now made “to shine upon the earth.” (Genesis 1:17) “God proceeded to make” them in the sense that they could now be seen from the Earth's surface.