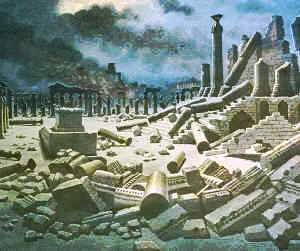 (More information about this topic can be found at the bottom of this article.)

Some who wish to accuse the Watchtower organization of being a "false prophet" claim that the 607 B.C. date chosen by the Society for the time of the destruction of Jerusalem by Babylon is proof. Christendom endorses and teaches the date of 587 B.C. (which is the opinion of secular historians today).

Most secular historians tell us that some captives were taken from Jerusalem in 598 B.C., but that the city was not harmed at that time. They also tell us that a later siege in 587 B.C. destroyed Jerusalem and that all but a handful of the inhabitants of all of Judah were deported from the land at that time.

They also tell us that

"the edict of Cyrus in 538 B.C., substantially confirmed by modern archeological discoveries, permitted the Jews to return to their homeland." - Americana.

Now if we insist on perfection in the statements of God's inspired prophets of the Bible concerning time factors, then either the inspired prophets who warned of the desolation of Jerusalem by Babylon must have proclaimed a 49 (or 50) year desolation of Jerusalem - from 587 B.C. to 538 B.C. (or 537 B.C. if we properly allow for preparation and travel time after Cyrus' edict)! OR the secular historians of today are wrong about the 587 B.C. date which most of Christendom (and apostate ex-Jehovah's Witnesses) accepts.

Now Jehovah's Witnesses accept the 538 B.C. date for the edict of Cyrus since the evidence produced "by modern archeological discoveries" is probably better established for it, and it certainly correlates more properly with Bible chronology. And since the date 587 B.C. for the beginning of the desolation period is probably more doubtful than that of the "substantially confirmed" 538 B.C. date for the edict which led to the end of the desolation period and does not fit proper Bible chronology, Jehovah's Witnesses have decided that the date of the desolation of Jerusalem must have been 607 B.C. Why? Because Jehovah's Witnesses believe the inspired prophets Jeremiah and Daniel are more likely to be correct than secular historians! (Be sure to read pp. 186-189 in Let Your Kingdom Come, 1981 Watchtower publication.)

Daniel wrote that he was "reading the scriptures and reflecting on the SEVENTY years which, according to the word of the Lord [Jehovah] to the prophet Jeremiah, were to pass while Jerusalem lay in ruins." - Dan. 9:2, NEB. Also see Jer. 25:8-11, 17, 18.

Now isn't it interesting that Christendom (especially those most vocal dissident ex-Jehovah's Witnesses) condemns Jehovah's Witnesses as being false prophets for interpreting certain ancient dates (most notably the destruction of Jerusalem as 607 B.C.) based upon the clear statements of inspired Bible prophets which seem to contradict the conclusions of secular historians today?

Think about it. What's really happening when certain "Christians" insist that a figurative "prophet" be perfect in its interpretation of time and then turn around and say,

"Yes, Daniel was an inspired prophet (and so was Jeremiah), but, although he literally said Jerusalem would lie desolate for 70 years, HE REALLY MEANT 50 YEARS. We believe the authorities today who tell us it was really 50 years," these `Christians' say, "more than we believe the literal accuracy of the inspired prophet, Daniel (or Jeremiah)."?

In other words, it's o.k. to condemn those who have never claimed to be inspired prophets for an apparent error in the interpretation of a date and proclaim them false prophets, and, in so doing, indirectly (but necessarily) accuse the truly inspired Bible writers, who, they believe, made the very same kind of time "errors," of being false prophets .

Yes, those who insist on the secular historians' dates (which make a 50 year desolation) are, by necessity, insisting that the Bible prophets stated the wrong chronology (70 years of desolation). By their insistence on the 587 B.C. date they are saying the inspired prophets did not prophesy a literally accurate time!

The real difference is that Jehovah's Witnesses admit to being human, making nonessential errors at times, and not being an inspired "prophet." They truly believe the organization, as a whole, and over the long term, has the guidance of Holy Spirit, but this does not mean that every step, every thought, every utterance of every member will be perfect in this present system of things. The first Christians, who were obviously guided by Holy Spirit, admitted as much about themselves. And yet these Jehovah's Witnesses, imperfect as they may be, are courageous enough to say that Daniel and Jeremiah are inspired prophets of God and are certainly more likely to be correct than secular historians.

If Jehovah's Witnesses are wrong on this nonessential "time interpretation," does that make them false prophets because they have chosen the literal accuracy of God's inspired prophets over the statements of uninspired historians? I think not! I believe, instead, a strong statement of their obedience to proper authority (the Bible in this case) is being made in spite of the ridicule and dishonest accusations of many false Christians.

On the other hand, what if the actual inspired prophets (Daniel and Jeremiah) are literally correct? Where does that put those "Christians" who are, in actuality, saying that Daniel and Jeremiah were false prophets? It seems we have a real test of faith and proper heart condition here.

When Was Ancient Jerusalem Destroyed?—Part One; Why It Matters; What the Evidence Shows (w11 10/1 pp. 26-31; Watchtower Online Library)

The Destruction of Jerusalem - 607 B.C.E.? (Search For Bible Truths)

Seven Times - The Times of The Gentiles (Pastor Russsel)