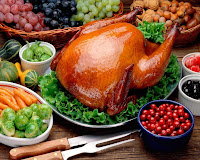 There are many wholesome occasions that Jehovah's Witnesses celebrate such as marriage anniversaries  and weddings which are referred to favorably in the Scriptures. But when it comes to the observance of certain religious events (Holidays or "Holy Days"), there is only one occasion that Jesus actually commanded his followers to observe. He required his followers to memorialize his death. (Luke 22:19, 20) Therefore, Jehovah's Witnesses only formally celebrate the one event that Jesus commanded his followers. The memorial of his death (1 Cor.11:23- 26). For more, see: The Lord’s Evening Meal—An Observance That Honors God (Watchtower Bible and Tract Society).

To help understand Jehovah's Witnesses' position regarding the national holiday of Thanksgiving, this article will consider the following three aspects:

1.) How Christians are to be thankful every day - not simply being satisfied with allowing political governments to formally set aside one day out of the year to be thankful.

2.) Thanksgiving and its Origins


Be Thankful Every Day

Do true Christians need to set one day aside for Thanksgiving? Should the political governments tell us what day we should give thanks?

Jehovah's Witnesses give thanks every day and allow no one to tell them on which day they can thank God.

Also consider that genuine thanks should be accompanied by a deep desire to demonstrate gratitude in action. In contrast, how many observers of the national Thanksgiving holiday actually offer thanks to God? Are not their thoughts more on feasting and having a merry time than on the many gifts God has given? Can it be said that thanksgiving is offered to God by indulging in an extra-big meal? Thanksgiving to God does not come from the stomach but from the mind. It is verbally expressed. “I will praise the name of God with song, and I will magnify him with thanksgiving.” (Ps. 69:30) “In everything by prayer and supplication along with thanksgiving let your petitions be made known to God.”—Phil. 4:6.

Thanksgiving and its Origins

It is relatively easy to discover that holidays such as Easter, Christmas or Halloween have been directly adopted from pagan celebrations. (For more, see the Holidays category.) But what about Thanksgiving?

Note what the publication Holidays Around the World, by Joseph Gaer says about Thanksgiving: 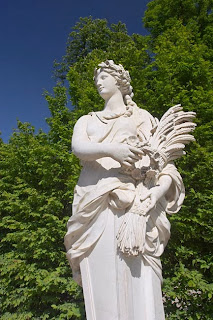 "Thanksgiving for the annual harvest is one of the oldest holidays known to mankind ... 'The Romans celebrated their Thanksgiving early in October. The holiday was dedicated to the goddess of harvest, Ceres, and the holiday was called Cerelia. 'The Christians took over the Roman holiday and it became well established in England, where some of the Roman customs and rituals for this day were observed ... "

"Throughout the world harvest has always been the occasion for many queer customs which all have their origin in the animistic belief in the corn [grain]-spirit or corn [grain]-mother. This personification of the crops has left its impress upon the harvest customs of modern Europe. .... Throughout the world, as Sir J. G. Frazer shows, the semi-worship of the last sheaf is or has been the great feature of the harvest-home. Among harvest customs none is more interesting than harvest cries; the Devonshire reapers go through a ceremony which in its main features is a counterpart of pagan worship." - pp. 231-232, Encyclopedia Britannica, volume 11, 14th edition.

"The Pilgrims, who in 1621 observed our initial Thanksgiving holiday, were not a people especially enthusiastic about the celebration of festivals. In fact these austere and religious settlers of America would have been dismayed had they known of the long and popular history of harvest festivals, of which their Thanksgiving was only the latest. .... The harvest festival, with its attendant rites, seems to have spread out from ... Egypt and Syria and Mesopotamia. The first or the last sheaf of wheat was offered to the `Great Mother' .... Astarte [equivalent to Ishtar and Eastre] was the Earth Mother of the ancient Semites; to the Phrygians she was Semele; under the name of Demeter she was worshiped by the Greeks at the famous Eleusinian Mysteries..." - pp. 271-272, Celebrations - The Complete Book of American Holidays, Robert J. Myers, Doubleday & Co., 1972. For more, see: THANKSGIVING - Does It Have Any Known Pagan Religious Association?.

It would be wrong to incorporate anything originally used for pagan worship into our worship or related activities. Holidays, for example, are "Holy Days" and are a part of "worship" by their very name. While we today have no practical option but to use things like the Gregorian calendar (which uses the names of pagan Roman gods), we do have a choice whether or not to participate in customs which were originally devoted to honoring these gods. And according to Scripture, we should take advantage of that choice. Because if pagan ceremonies, customs, etc. are really mixed in with ceremonies, customs, etc. that we use today in worship to God, they are not merely unacceptable - - - they are detestable to God. We must completely get away from these unclean things and not even "touch" them. (2 Cor. 6:17) Notice how exclusive the worship of God must be: "Be careful to do everything I have said to you. Do not invoke the names of other gods; do not let them be heard on your lips." - Exodus 23:13, NIVSB. For more, see: Why Do Jehovah's Witnesses Avoid Pagan Customs?

It was not until 1789 that the first national Thanksgiving Day was proclaimed by George Washington. And, even after that precedent, this practice was not carried on by succeeding presidents. In addition to Presidents Jackson and Taylor, it is claimed that Thomas Jefferson refused to issue Thanksgiving proclamations, condemning it during his two terms. In a letter to the Rev. Mr. Miller, he gave his reasons for refusing:

Finally, it was Sarah J. Hale that influenced President Abraham Lincoln to issue his Thanksgiving Proclamation on October 3, 1863 in which Lincoln established a yearly national festival, which ensuing presidents have honored.

Many governors opposed the idea because they felt that it was an example of state interference with religion. Actually, in time the celebration itself became more political.

For example, Mrs. Hale and her supporters intended it to be both a day of patriotism and religion. She wrote in one article: “Then in every quarter of the globe our nationality would be recognized . . . every American . . . would thrill his soul with the purest feelings of patriotism and the deepest emotions of thankfulness for his religious enjoyments.” That this idea was held by others is noted in The American Book of Days: “It has frequently been the custom for clergymen to preach political sermons on Thanksgiving Day. In the early years of the nineteenth century their sermons were extremely partisan.”

"First-century Christianity had no temples, built no altars, used no crucifixes, and sponsored no garbed and betitled ecclesiastics. Early Christians celebrated no state holidays..."—The Rise of Christianity, by E. Barnes, 1947, p. 333.

Concerning this, notice what the book On the Road to Civilization—A World History says of the early Christians:

“Christians refused to share certain duties of Roman citizens. The Christians . . . felt it a violation of their faith to enter military service. They would not hold political office. They would not worship the emperor.” When the Jewish high court “positively ordered” the disciples to stop preaching, they answered: “We must obey God as ruler rather than men.” (Acts 5:27-29)

It is a fact of ancient and modern-day history that in every nation and under all circumstances true Christians have endeavored to maintain complete neutrality concerning factions of the world. (Luke 4:8; John 17:15, 16; John 18:36)

Jehovah’s Witnesses do not try to prevent others from taking part in patriotic ceremonies, for that is up to each individual as to whom or what he will serve, worship, or pledge his allegiance, but Jehovah’s Witnesses wish to remain neutral toward all national flags, symbols, or emblems and their patriotic ceremonies. For more, see: Christian Neutrality (Jehovah's Witnesses United) and "Religious Persecution - Why?" (Watchtower Bible and Tract Society).


For more information concerning Jehovah's Witnesses and Thanksgiving, see the following references and/or click on the following links:

Link: THANKSGIVING - Does It Have Any Known Pagan Religious Association? (Search For Bible Truths)

Link: Is there anything wrong with buying a turkey, which is on sale, and making a dinner on Thanksgiving? Is Thanksgiving pagan? (Jehovah's Witnesses Questions and Answers)

Posted by Elijah Daniels at 5:46 PM