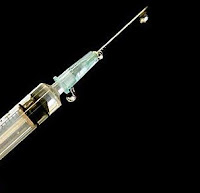 "This raises an important point for Christians, who are concerned with the Bible’s prohibition on misuse of blood. (Acts 15:28, 29) Are any other vaccines made from blood?

"As a general rule, with the exception of Heptavax-B, active immunizations are not produced from blood. This includes all baby shots, for example.

"The opposite is true of passive immunization. One can assume that when one is advised to have a shot after likely exposure, such as after stepping on a rusty nail or after being bitten by a dog, the shots (unless they are just routine boosters) are hyperimmune serum and have been made using blood. This is also true of Rh immune globulin (Rhogam), which is often recommended for Rh-negative mothers who for some reason are exposed to Rh-positive blood, as at the birth of an Rh-positive baby.

"Since these passive immunizations are those of concern regarding the issue of blood, what stand would be taken by the conscientious Christian? Previous articles in this journal and its companion, The Watchtower, have presented a consistent position: It would be up to the Bible-trained conscience of the individual Christian as to whether he would accept this treatment for himself and his family. (FOOTNOTE: See The Watchtower, June 15, 1978, pages 30-1.)"

Posted by Elijah Daniels at 8:27 AM