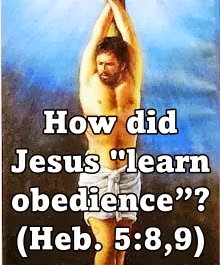 "The Bible says something amazing about Jesus: “Although he was a Son, he learned obedience from the things he suffered; and after he had been made perfect he became responsible for everlasting salvation to all those obeying him.” (Hebrews 5:8, 9) This Son had existed for countless ages in heaven. He saw Satan and his fellow rebel angels disobey, but the firstborn Son never joined them. Inspired prophecy applied these words to him: “I . . . was not rebellious.” (Isaiah 50:5) How, then, could the words “he learned obedience” apply to this perfectly obedient Son? How could such a perfect creature be “made perfect”?

"Consider an illustration. A soldier has an iron sword. Although it has never been tested in battle, it is perfectly formed and well crafted. However, he trades that sword for one made of a stronger metal, hardened steel. This new sword has already served well in battle. Is that not a wise trade? Similarly, the obedience Jesus demonstrated before he came to the earth was flawless. But after his sojourn here, his obedience was of an altogether different quality. It was now tested, hardened, as it were, and proved by trials that Jesus could never have encountered in heaven." - “He Learned Obedience”; cf chap. 6 pp. 56-65; par. 3 and 4; Watchtower Online Library