Does the Bible Mention Dinosaurs? 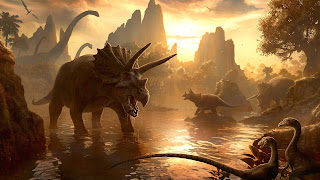 The Bible says that God made "flying creatures" and "great sea monsters" in the fifth era listed in Genesis. The Hebrew expression translated “great sea monsters” [Hebrew, tan·ni·nim′] could have included dinosaurs, which often inhabited swampy, watery areas. And perhaps other types of dinosaurs were created in the sixth epoch. The vast array of dinosaurs with their huge appetites would have been appropriate considering the abundant vegetation that evidently existed in their time. (Genesis 1:20-24)

And even if one were to simply reject the above, does the Bible really have to mention something in order for it to have existed? Since the Bible is not a biography manual, specifically naming every living creature really was not necessary. But, in actuality, the Bible did say that God created all living "creatures" (animals, living things) and dinosaurs would certainly have been in that category.