What Language did Adam and Eve Speak? 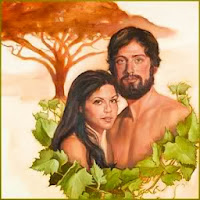 The Bible says that before the Flood, all mankind “continued to be of one language and of one set of words.” (Gen. 11:1) The Bible indicates that the language later called Hebrew was that original “one language.” (See below.) This does not mean that all other languages stemmed from and are related to Hebrew but that Hebrew preceded all other languages.

Origin of the Hebrew Language

Secular history does not reveal the origin of the Hebrew language—or, for that matter, of any of the most ancient languages known, such as Sumerian, Akkadian (Assyro-Babylonian), Aramaean, and Egyptian. This is because these tongues appear already fully developed in the earliest written records men have found. The various views advanced by scholars concerning the origin and development of Hebrew—such as those claiming that Hebrew derived from Aramaic or from some Canaanite dialect—are therefore conjectural. The same may be said for attempts at explaining the derivation of many words found in the Hebrew Scriptures. Scholars frequently assign an Akkadian or an Aramaic source for many of these words. However, as Dr. Edward Horowitz comments: “In the field of etymology [the study of word origins] there are wide differences of opinion among scholars, even among the very best of them.” He then cites examples of explanations by renowned scholars of the etymology of certain Hebrew words, in each case showing that other prominent scholars disagree, and then adds: “And so we have these never ending differences between equally highly respected authorities.”—How the Hebrew Language Grew, 1960, pp. xix, xx.

The Bible is the only historical source giving reliable evidence of the origin of the language that we know as Hebrew. It was, of course, spoken by the Israelite descendants of “Abram the Hebrew” (Ge 14:13), who, in turn, was descended from Noah’s son Shem. (Ge 11:10-26) In view of God’s prophetic blessing on Shem (Ge 9:26), it is reasonable to believe that Shem’s language was not affected when God confused the language of the disapproved people at Babel. (Ge 11:5-9) Shem’s language would remain the same as it had been previously, the “one language” that had existed from Adam onward. (Ge 11:1) This would mean that the language that eventually came to be called Hebrew was the one original tongue of mankind. As stated, secular history knows no other. - Insight on the Scriptures, pp.1068-1077, Hebrew, II