As of 8-15-2012, The Watchtower has had a circulation larger than any other magazine in the world. Each issue has a print run of more than 42 million copies. Awake! is second, with a circulation of 41 million copies each issue. Both magazines are published by Jehovah’s Witnesses and are distributed in 236 lands.

How do other publications compare? According to The Association of Magazine Media, the top U.S. paid-for magazine is published by AARP, an organization that targets people over 50 years of age. That magazine has a circulation of over 22.4 million. Germany’s ADAC Motorwelt averages close to 14 million copies, and the Chinese Gushi Hui (stories) prints 5.4 million copies.

The Witness publications also excel in translation. The Watchtower is translated into more than 190 languages, and Awake! into more than 80. By comparison, Reader’s Digest is published in 21 languages, though content varies from country to country. 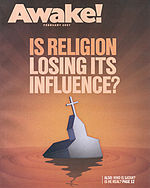 Unlike the other magazines mentioned above, The Watchtower and Awake! are financed by voluntary contributions, have no advertising, and carry no sales price.

The purpose of The Watchtower is to explain Bible teachings—and particularly what the Scriptures say about God’s Kingdom. It has been published continually since 1879. Awake! deals with general subjects, such as nature and science, with a view to building faith in the Creator. It also stresses how the Bible can be of practical value in our life. (The above excerpts are from the 8-15-12 Watchtower: The Watchtower—No Other Magazine Comes Close. To view the entire article, click here.)

VIDEO: The Watchtower—Published Since 1879 (JW.ORG)
See how the most widely circulated magazine in the world has looked over the years.