Exodus 12:12 [says]: "For I will pass through the land of Egypt on this night and strike every firstborn in the land of Egypt, from man to beast; and I will execute judgment on all the gods of Egypt. I am Jehovah."

JEHOVAH instructed Moses to appear before Pharaoh and, speaking in Jehovah’s name, to say: “Send my people away.” (Ex 5:1) Pharaoh refused. He did not want to lose a nation of slaves. More than that, Pharaoh did not know, or recognize, Jehovah as the true God. (Ex 5:2) Pharaoh worshiped the gods of Egypt and even considered himself to be a god! Thus the issue was pressed to the fore: Who is the true God? By means of ten plagues, Jehovah executed judgment “on all the gods of Egypt,” resulting in Israel’s release and giving evidence that Jehovah is the living and true God.—Ex 12:12.

Religion. Egypt was an ultra religious land, rife with polytheism. Every city and town had its own local deity,bearing the title "Lord of the City." A list found in the tomb of Thutmose III contains the names of some 740 gods. (Ex 12:12)


(Some of the Egyptian gods)

Frequently the god was represented as married to a goddess who bore him a son, "thus forming a divine triad or trinity in which the father, moreover, was not always the chief, contenting himself on occasion with the role of prince consort, while the principal deity of the locality remained the goddess." (New Larousse Encyclopedia of Mythology, 1968, p. 10)

Each of the chief gods dwelt in a temple that was not open to the public. The god was worshiped by the priests who awoke him each morning with a hymn, bathed him, dressed him, "fed" him, and rendered him other services. (Contrast Ps 121:3, 4; Isa 40:28.)

In this, the priests were apparently regarded as acting as the representatives of the Pharaoh, who was believed to be a living god himself, the son of the god Ra. This situation certainly emphasizes the courage shown by Moses and Aaron in going before Pharaoh to present him with the decree of the true God and adds significance to Pharaoh's disdainful response, "Who is Jehovah, so that I should obey his voice?"—Ex 5:2

The plagues Jehovah visited upon Egypt in the time of Moses were manifestations of his great power and caused his name to be declared among the nations.  (Ex 9:14, 16)

Battle of the Gods

Before Pharaoh of Egypt. Moses and Aaron were now key figures in a 'battle of the gods.' In the persons of the magic-practicing priests, the chiefs of whom were apparently named Jannes and Jambres (2 Tim. 3:8), Pharaoh summoned the power of all the gods of Egypt against the power of Jehovah. The first miracle that Aaron performed before Pharaoh at Moses' direction proved Jehovah's supremacy over the gods of Egypt, even though Pharaoh became more obstinate. (Ex 7:8-13)

Later, when the third plague occurred, even the priests were forced to admit, "It is the finger of God!" And they were so severely stricken by the plague of boils that they were altogether unable even to appear before Pharaoh to oppose Moses during that plague.—Ex 8:16-19; 9:10-12

The gods and goddesses worshiped by the Egyptians give evidence of an underlying Babylonian heritage. There were triads of deities and even triple triads, or "enneads." One of the popular triads consisted of Osiris, his consort Isis, and their son Horus.—  [see picture]

Osiris was the most popular of the Egyptian gods and was regarded as the son of the earth-god Geb and the sky-goddess Nut. It was said that Osiris became the husband of Isis and reigned as king over Egypt.

The mythological accounts tell of Osiris' being murdered by his brother Set and then being restored to life, becoming the judge and king of the dead.

Mother-and-son worship was also very popular in Egypt. Isis is often portrayed with the infant Horus on her knees. This representation is so much like that of the Madonna and child that certain ones in Christendom have at times venerated it in ignorance.

With respect to the god Horus, there is evidence of the distortion of the Edenic promise concerning the seed that would bruise the serpent in the head. (Ge 3:15) At times Horus is depicted as trampling crocodiles and grasping snakes and scorpions. According to one account, when Horus proceeded to avenge the death of his father Osiris, Set, who had murdered Osiris, changed himself into a serpent.

By means of the plagues he visited upon the Egyptians, Jehovah humiliated and executed judgment upon their gods. (Ex 12:12; Nu 33:4)

The first plague, the turning of the Nile and all the waters of Egypt into blood, brought disgrace to the Nile-god Hapi. The death of the fish in the Nile was also a blow to Egypt's religion, for certain kinds of fish were actually venerated and even mummified. (Ex 7:19-21)

The frog, regarded as a symbol of fertility and the Egyptian concept of resurrection, was considered sacred to the frog-goddess Heqt. Hence, the plague of frogs brought disgrace to this goddess. (Ex 8:5-14)

The third plague saw the magic-practicing priests acknowledging defeat when they proved to be unable by means of their secret arts to turn dust into gnats. (Ex 8:16-19) The god Thoth was credited with the invention of magic or secret arts, but even this god could not help the magic-practicing priests to duplicate the third plague.
The line of demarcation between the Egyptians and the worshipers of the true God came to be sharply drawn from the fourth plague onward. While swarms of gadflies  invaded the homes of the Egyptians, the Israelites in the land of Goshen were not affected. (Ex 8:23, 24)

The next plague, the pestilence upon the livestock, humiliated such deities as the cow-goddess Hathor, Apis,

and the sky-goddess Nut, who was conceived of as a cow having the stars affixed to her belly. (Ex 9:1-6)


The plague of boils brought disgrace to the gods and goddesses regarded as possessing healing abilities, such as Thoth, Isis, and Ptah.  (Ex 9:8-11)

The severe hailstorm put to shame the gods who were considered to have control of the natural elements; for example, Reshpu, who, it appears, was believed to control lightning, and Thoth, who was said to have power over the rain and thunder. (Ex 9:22-26)

The locust plague spelled defeat for the gods thought to ensure a bountiful harvest, one of these being the fertility god Min, who was viewed as a protector of the crops. (Ex 10:12-15)

Among the deities disgraced by the plague of darkness were sun-gods, such as Ra and Horus, and also Thoth the god of the moon and believed to be the systematizer of sun, moon, and stars.—Ex 10:21-23


The death of the firstborn resulted in the greatest humiliation for the Egyptian gods and goddesses. (Ex 12:12) The rulers of Egypt actually styled themselves as gods, the sons of Ra, or Amon-Ra. It was claimed that Ra, or Amon-Ra, had intercourse with the queen. The son born was, therefore, viewed as a god incarnate and was dedicated to Ra, or Amon-Ra, at his temple. Hence, the death of Pharaoh's firstborn, in effect, actually meant the death of a god. (Ex 12:29)

This in itself would have been a severe blow to Egypt's religion, and the complete impotence of all the deities was manifested in their being unable to save the firstborn of the Egyptians from death. 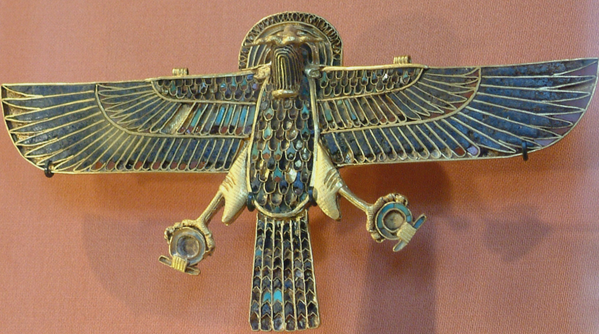 The internet has plenty of articles regarding the Egyptian gods and the depravity of their worshippers. This image (above) of Horus showing a bird with spread out wings is often used in modern times to depict flying associations.

(The basis for this article was found in the "Insight of the Scriptures" as published by Jehovah's Witnesses. Search yourself in our publications.)

This article was originally published by Brother Mac Tuckey on his site, 'Supporting the Brotherhood'. The original article, 'Explaining Exodus 12:12' can be found by clicking on this link:
http://supportingthebrotherhood.blogspot.com/2014/04/explaining-exodus-1212.html