Features of the Watchtower ONLINE LIBRARY 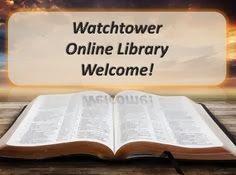 The Watchtower ONLINE LIBRARY is a very helpful tool for newly interested ones and experienced publishers alike. In addition to the helpful search box found there, here are some of the main features that can assist in your navigation available to date:

"While they were eating, Jesus took bread, gave thanks and broke it, and gave it to his disciples, saying, "Take and eat; this is my body."'

"As they continued eating, Jesus took a loaf and, after saying a blessing, he broke it and, giving it to the disciples, he said: “TAKE, eat. This means my body.”'


Though many Bibles read like the New International Version by using the word "is" here, many have attempted to portray the New World Translation AS IF IT IS THE ONLY TRANSLATION that uses the word "means" ("estin" in Greek) instead of "is" at Mt. 26:26.

However, notice these other translations:

"During the meal Jesus took a loaf. He said the blessing over it,and broke it into pieces, and gave it to his disciples.'Take! Eat!' he said. 'This MEANS my body.' "

A New Translation of the Bible by James Moffatt (impression of 1948):

"Take and eat this, it MEANS my body."

In it's translational notes, The Translator's New Testament (1973) reads:

"This saying is interpreted in different ways in different parts of the Church. In the original context the word "is" can only mean 'stand for', 'represents', as Jesus' actual body was there in it's physical form. Compare the use of 'is' in Matt. 13:38; Lk. 8:11; 1 Cor. 11:24,25 and many other places, WHEN IT MEANS 'REPRESENT' OR 'STANDS FOR'. In Mat 26:26 and parallels, however, T[ranslator's] T[estament] has retained the literal translation 'is.' "

It is true that the Greek word e·stin´ a form of the Greek verb “to be,” essentially means “is” and some Bible translations render Mt. 26:26 as “this is” instead of "this means". But the same verb can also mean “signify.” Interestingly, in many versions of the Bible, this verb is frequently translated “mean” or “stand for”. IT IS THE CONTEXT that determines the most precise rendering. For instance, at Matthew 12:7, e·stin´ is rendered “means” in many Bible translations: “If you had known what this means [Greek, e·stin]: I want mercy and not sacrifice, you would not have condemned the blameless.”—CEI; Douay Version.

Besides, Jesus could not have meant that his followers were literally to eat his flesh and drink his blood because throughout human history, God consistently made it clear for humans to abstain from blood. God began with commanding Noah and his family to abstain from blood. (Gen. 9:4) He repeated this through the Mosaic law (Lev. 7:26, 27; 17:10, 11, 13, 14) and He continued to remind us through the pages of the New Testament. (Acts 15:28, 29; Acts 15:19, 20)

Jesus would never institute an observance that would require his followers to violate a sacred decree of Almighty God.

Clearly, then, Jesus used the bread and wine as symbols. The unleavened bread meant, or represented, his sinless body that would be sacrificed. The red wine signified his blood that would be poured out “in behalf of many for forgiveness of sins.” —Matthew 26:28