Does Gen. 2:5,6 Indicate That it Never Rained Before the Flood? 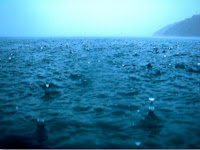 "At an early point in the history of the preparation of the earth, "God had not made it rain upon the earth," but "a mist would go up from the earth and it watered the entire surface of the ground." The time referred to is evidently early on the third creative "day," before vegetation appeared. (Gen. 2:5, 6; 1:9-13) ) The first instance in the Biblical record when rain is specifically mentioned as falling is in the account of the Flood. Then “the floodgates of the heavens were opened,” and “the downpour upon the earth went on for forty days and forty nights.” - Gen. 7:11, 12; 8:2." - Insight on the Scriptures Vol. 2; "Rain"; par. 3.

Did Rainbows Exist Before the Flood?

"The first Biblical reference to a rainbow is in the account of the covenant God made with Noah and his offspring after the Flood survivors came out of the ark. (Ge 9:8-17; Isa 54:9, 10) This splendid sight of itself would have been reassuring and an indication of peace to Noah and his family.

"Many opinions have been offered as to whether this was the first time humans saw a rainbow. Some commentators have held that rainbows had been seen before and that God’s ‘giving’ the rainbow at this time was really a ‘giving’ of special meaning or significance to a previously existing phenomenon. Many of those holding this view believe that the Flood was only local or did not substantially change the atmosphere.

"Nevertheless, this is the first mention of a rainbow, and if a rainbow had been seen earlier, there would have been no real force in God’s making it an outstanding sign of his covenant. It would have been commonplace, and not a significant marker of a change, of something new.

"The Bible does not describe the degree of clarity of the atmosphere just prior to the Flood. But apparently atmospheric conditions were such that, until a change came about when “the floodgates of the heavens were opened” (Ge 7:11), no others before Noah and his family had seen a rainbow. Even today, atmospheric conditions affect whether a rainbow can be seen or not." - Insight on the Scriptures Vol. 2; "Rainbow"; pars. 3-6.