Confirming its pagan background, The Catholic Encyclopedia, edition of 1909, states in Volume 5, on page 227: “A great many pagan customs, celebrating the return of spring, gravitated to Easter. The egg is the emblem of the germinating life of early spring. . . . The rabbit is a pagan symbol and has always been an emblem of fertility.” In harmony with this The Encyclopedia Americana, edition of 1956, states in Volume 9, on page 506: “According to the Venerable Bede, English historian of the early 8th century, the word [Easter] is derived from the Norse Ostara or Eostre, meaning the festival of spring at the vernal equinox, March 21, when nature is in resurrection after winter. Hence, the rabbits, notable for their fecundity, and the eggs, colored like rays of the returning sun and the northern lights or aurora borealis.”

If Easter were truly a Christian celebration, why the eggs and rabbits? What connection could they have with the resurrection of Jesus Christ? Obviously none whatsoever! They are traditional in Easter because the ancient pagans used them when celebrating their spring festival. Both were important symbols in pagan sex worship. On this point, consider what is said by Funk and Wagnalls Standard Dictionary of Folklore, Mythology and Legend, edition of 1949, Volume one, page 335:

“Children roll pasch eggs in England. Everywhere they hunt the many-colored Easter eggs, brought by the Easter rabbit. This is not mere child’s play, but the vestige of a fertility rite, the eggs and the rabbit both symbolizing fertility. Furthermore, the rabbit was the escort of the Germanic goddess Ostara who gave the name to the festival by way of the German Ostern.” Do you think it is a Christian practice to encourage children to engage in a pagan fertility rite?

NO SCRIPTURAL BASIS FOR EASTER 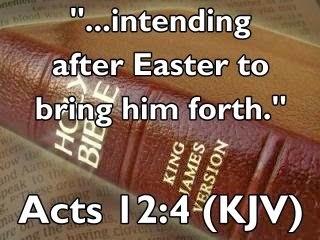 But, you may object, the word “Easter” appears in the Bible at Acts 12:4. Why is it there if it is a pagan celebration? The word is used in the Authorized Version of the Bible [King James Version], but it is the result of poor translating from the Greek language in which the book of Acts was originally written. Other translations properly render the Greek word pascha as passover, not Easter. Note what The Westminster Dictionary of the Bible has to say about this on page 145: “Easter. Originally the spring festival in honor of the Teutonic goddess of light and spring known in Anglo-Saxon as Eastre. As early as the 8th century the name was transferred by the Anglo-Saxons to the Christian festival designed to celebrate the resurrection of Christ. In A.V. [Authorized Version] it occurs once (Acts 12:4), but is a mistranslation.”

Was there truly a Christian festival in the spring that was “designed to celebrate the resurrection of Christ”? Not in the days of Christ’s apostles. As foretold by the apostle Paul, after their death a great falling away from true Christianity occurred, which resulted in many unscriptural celebrations. (Acts 20:29, 30) Although the apostle Paul pointed out, under inspiration, that Christians were not to become tied to a tradition of observing days, months and seasons and years, some Christians proceeded to do it anyway. (Gal. 4:9-11) They apparently were persons who insisted on continuing the festivals of the Mosaic law but enlarged them to be commemorations of what they foreshadowed. Thus the Passover was given additional significance in Jesus Christ, the antitypical Passover Lamb, and in his resurrection. To this annual observance apostates gradually added practices and symbols from the pagan spring festival, which resulted in the celebration now called Easter.

That the celebration finds no authorization in the Holy Scriptures or precedent among early Christians is pointed out by The Encyclopædia Britannica, eleventh edition, Volume 8, page 828: “There is no indication of the observance of the Easter festival in the New Testament, or in the writings of the apostolic Fathers. The sanctity of special times was an idea absent from the minds of the first Christians. . . . The ecclesiastical historian Socrates (Hist. Eccl. v. 22) states, with perfect truth, that neither the Lord nor his apostles enjoined the keeping of this or any other festival . . . and he attributes the observance of Easter by the church to the perpetuation of an old usage, ‘just as many other customs have been established.’” The old usage was the practice of pagans to have a festival in honor of their goddess of spring. 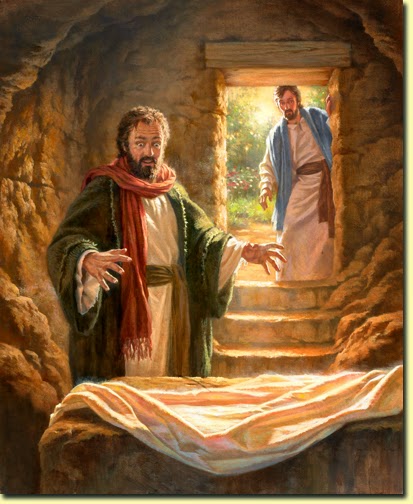 The association of Christ’s resurrection with Easter has not changed the celebration into something that is
acceptable to true Christians. A rotten apple is not transformed into wholesome food merely by wrapping it in the skin of an orange.

Notwithstanding the fact that religious leaders of Christendom proclaim Easter as a Christian celebration, it is still pagan. You might say, “What difference does that make as long as it honors Christ?” The difference is between having the approval of God or having his disapproval, and that is the difference between eternal life and eternal death.—2 Thess. 1:8, 9.

If you desire the approval of the true God consider the command given to Christians at 2 Corinthians 6:14, 15, 17: “Do not become unevenly yoked with unbelievers. For what sharing do righteousness and lawlessness have? Or what fellowship does light have with darkness? Further, what harmony is there between Christ and Belial? Or what portion does a faithful person have with an unbeliever? ‘Therefore get out from among them, and separate yourselves,’ says Jehovah, ‘and quit touching the unclean thing.’”

The Easter festival is an “unclean thing” because its roots are in pagan sex worship. People who celebrate it dishonor Jesus Christ by associating his name with that abominable form of worship. Why continue to do what is disgraceful to him and dishonoring to God? Heed the Scriptural command to separate from this false religious practice and those who advocate it. Recognize Easter for what it actually is, a relic of ancient sex worship. - "Easter—Relic of Ancient Sex Worship"; Watchtower 3/15/68

In view of all the foregoing what should be the attitude of those who would please God toward the celebration of Easter together with all its pagan appendages? As already noted, neither Jesus nor any of his apostles established any Christian festival days. Nor was this any mere oversight, as shown by Paul’s rebuke to the Christians at Galatia: “How is it that you are turning back again to the weak and beggarly elementary things and want to slave for them over again? You are scrupulously observing days and months and seasons and years.”—Gal. 4:9-11.

Even more strongly condemned in the Scriptures is the comingling of paganism with the worship of the one true God: “Flee from idolatry. . . . What, then, am I to say? That what is sacrificed to an idol is anything, or that an idol is anything? No; but I say that the things which the nations sacrifice they sacrifice to demons, and not to God; and I do not want you to become sharers with the demons. You cannot be drinking the cup of Jehovah and the cup of demons; you cannot be partaking of ‘the table of Jehovah’ and the table of demons. Or ‘are we inciting Jehovah to jealousy’? We are not stronger than he is, are we?” Paganism is the product of Satan and his demons, and to mix it with Christianity is an affront to Jehovah God that he will not permit to go unnoticed, for he is “a God exacting exclusive devotion.”—1 Cor. 10:14-22; Ex. 20:5.

The adopting of pagan appendages in Christian worship is also ruled out with these words: “What fellowship does light have with darkness? Further, what harmony is there between Christ and Belial? Or what portion does a faithful person have with an unbeliever? And what agreement does God’s temple have with idols?” None whatever. “‘Therefore get out from among them, and separate yourselves,’ says Jehovah, ‘and quit touching the unclean thing”’; “‘and I will take you in.’” Godless paganism is part of this unclean world, and Christians must keep themselves “without spot from the world.”—2 Cor. 6:14-18; Jas. 1:27.

Christians show appreciation for the miracle of Christ’s resurrection, not by celebrating a certain day set aside by some ancient council of men, and doing so with pagan appendages, but by accepting by faith the fact of Jesus’ resurrection and by letting it give them hope for their dead loved ones and for themselves and then letting that hope spur them on to serve Jehovah God with all their heart, mind, soul and strength.—Mark 12:30; 1 Cor. 15:58.  - Easter—What Are Its Origins?; Watchtower 4/15/63

Posted by Elijah Daniels at 4:13 PM