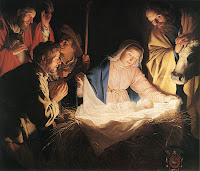 "For unto us a child is born, unto us a son is given; and the government shall be upon his shoulder; and his name shall be called Wonderful Counsellor, Mighty God, Eternal Father, Prince of Peace." (Isa. 9:6)

Pretty much all Christians accept this son as being the Christ.  Some will tell you that since the meaning of this symbolic name includes the words "Mighty God, Eternal Father," then Jesus is the Mighty God and the Eternal Father.

But there are at least two other ways this personal name has been interpreted by reputable Bible scholars. (1) The titles found within the name (e.g., "Mighty God") are intended in their secondary, subordinate senses. (2) the titles within the name are meant to praise God the Father, not the Messiah.

First, (1) there is the possibility that the words (or titles) found in the literal meaning of the name apply directly to the Messiah all right but in a subordinate sense.  In other words, Christ is "a mighty god" in the same sense that God's angels were called "gods" and the judges of Israel were called "gods" by God himself (also by Jesus - John 10:34, 35), and Moses was called "a god" by Jehovah himself.  This is the interpretation of Is. 9:6 by the WT Society at this time.

Yes, men and angels were called gods (elohim - Hebrew; theos - Greek) in a proper, but subordinate, sense by Jehovah and his inspired Bible writers.  Although they were given this elevated title in a proper sense (not false gods), it was obviously with the clear understanding that it in no way implied a comparison with the Most High, Only True God.  (A bank employee calling his boss, the head of the bank, "the president" would certainly not imply an equality of position, power, etc. with "The President" [of the USA].)

The word "god" as understood by those who used that term simply meant a "mighty one" - see Young's Concordance.  In fact the word "Mighty" as found at Is. 9:6 (Gibbor in the original Hebrew) is also applied to the angels at Ps. 103:20 (see a modern concordance such as the New American Standard Exhaustive Concordance of the Bible).  It is interesting that the ancient translation of the Old Testament that Jesus frequently quoted, the Septuagint Version, renders Is. 9:6: "and his [the Messiah's] name is called the Angel [aggeloV, messenger] of Great Counsel."

In the same way, "Eternal Father" could mean that the Messiah is one who has been given eternal life and through him God has brought eternal life to many others.  (We might make the comparison that the Heavenly Father has brought men to life in this world through their earthly fathers.)  This would be intended in a clearly subordinate sense and not to take anything away from the ultimate honor, glory, worship, etc. due the Most High God and Father in heaven - Jehovah.

Therefore, since we obviously cannot take "Eternal Father" in the literal sense to mean that Jesus is the Father, we cannot take the rest of that same name (esp. `Mighty God') in its literal highest sense and say that Jesus is Mighty God, etc., either.

In addition to the distinct possibility of the use of the secondary subordinate meanings of the titles such as "God/god" as explained by Bible language scholars, we can see by the actual renderings of some trinitarian Bible translators at Is. 9:6 that they believe such subordinate meanings were intended by the inspired Bible writer.

Instead of "Mighty God," Dr. James Moffatt translated this part of Is. 9:6 as "a divine hero;" Byington has "Divine Champion;" The New English Bible has "In Battle Godlike;" The Catholic New American Bible (1970 and 1991 revision) renders it "God-Hero;" and the REB says "Mighty Hero."  Even that most-respected of Biblical Hebrew language experts, Gesenius, translated it "mighty hero" - p. 45, Gesenius' Hebrew-Chaldee Lexicon.

"In this psalm, which praises the king and especially extols his `splendor and majesty' (v. 3), it is not unthinkable that he was called `god' as a title of honor [cf.  Isa 9:6]."  (Bracketed information included in original footnote.  Emphasis is mine)

In addition, Rotherham has rendered "Eternal Father" as "father of progress," and the New English Bible translates it: "father of a wide realm."

The above-mentioned Bible translations by trinitarian scholars which apply the words in the name at Is. 9:6 in a subordinate sense directly to Jesus clearly show that they do not believe this scripture implies an equality with Jehovah the Father.

And second (2), another way competent Bible scholars have interpreted the meaning of this name is with the understanding that it (as with many, if not most, of the other Israelites' personal names) does not apply directly to the Messiah (as we have already seen with "Elijah," "Abijah," etc.) but is, instead, a statement praising the Father, Jehovah God.

Personal names in the ancient Hebrew and Greek are often somewhat cryptic to us today. The English Bible translator must fill in the missing minor words (especially in names composed of two or more Hebrew words) such as "my," "is," "of," etc. in whatever way he thinks best in order to make sense for us today in English.

For instance, two of the best Bible concordances (Young's and Strong's) and a popular trinitarian Bible dictionary (Today's Dictionary of the Bible) differ greatly on the exact meaning of many Biblical personal names because of those "minor" words which must be added to bring out the intended meaning.

Those missing minor words that the translator must supply at his own discretion can often make a vital difference!  - For example, the footnote for Gen. 17:5 in The NIV Study Bible: The name `Abram' "means `Exalted Father,' probably in reference to God (i.e., `[God is] Exalted Father')."- Brackets in original.

This is why another name the Messiah is to be called by at Jer. 23:6 is rendered, `The LORD [YHWH] IS Our Righteousness' in the following Bibles: RSV; NRSV; NEB; NJB;  JPS (Margolis, ed.); Tanakh; Byington; AT; and  ASV (footnote).  Of course other translations render it more literally by calling the Messiah  "The LORD [YHWH] Our Righteousness" to help support a `Jesus is God' doctrine.  Some of these (such as the NASB) actually render the very same name at Jer. 33:16 as "The LORD [or Jehovah] Is Our Righteousness"! - [bracketed information is mine].

Therefore, the personal name at Is. 9:6 has been honestly translated as: "And his name is called: Wonderful in counsel is God the Mighty, the everlasting Father, the Ruler of peace" - The Holy Scriptures, JPS Version (Margolis, ed.) to show that it is intended to praise the God of the Messiah who performs great things through the Messiah.

Of course it could also be honestly translated: "Wonderful Counselor and Mighty God is the Eternal Father of the Prince of Peace."

[a]"The Mighty God is planning grace;
[b] The Eternal Father [is] a peaceable ruler."

This latter translation seems particularly appropriate since it is in the form of a parallelism.  Not only was the previous symbolic personal name introduced by Isaiah at Is. 8:1 a  parallelism ("Maher-Shalal-Hash-Baz" means  [a]"quick to the plunder;   [b] swift to the spoil" - NIV footnote) but the very introduction to this Messianic name at Is. 9:6 is itself a parallelism: [a]"For unto us a child is born;  [b] unto us a son is given."  It would, therefore, be appropriate to find that this name, too, was in the form of a parallelism as translated by the Tanakh above.

So it is clear, even to a number of trinitarian scholars, that Is. 9:6 does not imply that Jesus is Jehovah God.

Does Isa. 9:6 prove that Jesus is God? (Search For Bible Truths)

One God in Three? (Pastor Russell; Heading: "No Trinity in the “Old Testament”')

How does the Codex Sinaiticus render Is. 9:6? (Jehovah's Witnesses Questions and Answers)

How is translated Isaiah 9:6 in old Aramaic Targums? (Jehovah's Witnesses Questions and Answers)

Or see the Scripture Index.