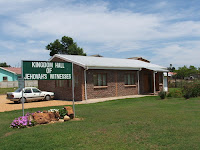 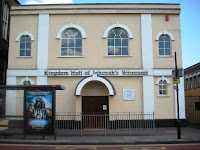 Jehovah's Witnesses invite all interested ones to attend meetings with them at their Kingdom Halls. If you would like to attend, just contact your local Kingdom Hall for times or click the button link below.

Every Kingdom Hall has an auditorium where Bible study programs and lectures are held. In most auditoriums, a stage serves as a teaching platform for the conducting of meetings. Usually, seating is provided for between 100 and 300 people. The Kingdom Hall may also have one or more auxiliary classrooms, an office, and a small library containing Bible-related literature and reference works that can be used for research by any member of the congregation.

In a Kingdom Hall, however, you will not find any of the religious emblems and fixtures typically associated with the churches of Christendom. There are no altars, images, or crosses on display. Why not? Jehovah’s Witnesses believe that the use of such items conflicts with the Bible’s command to “flee from idolatry.” (1 Corinthians 10:14; John 4:24) Many churches and temples are ornate and lavishly decorated. By contrast, Kingdom Halls are designed to be functional and are modest in design. The emphasis is placed on the Bible instruction that takes place within the building rather than on the structure itself.

Why the name Kingdom Hall? Public gatherings at a Kingdom Hall focus primarily on the teachings of the Bible and its central message about “the kingdom of God,” the theme of Jesus’ ministry. (Luke 4:43) So the name Kingdom Hall, which was coined in the 1930’s, appropriately describes the purpose of these buildings—to promote true worship and serve as a hub for the preaching of the “good news of the kingdom.” (Matthew 24:14) Thus, Kingdom Halls are not used for social or commercial activities. Construction, operating costs, and support expenses are funded entirely by voluntary donations. A collection plate is never passed. Rather, there is a box in a fixed location for any who wish to make a contribution.

Kingdom Halls serve the same purpose in all parts of the world, but they are built in a wide range of sizes and styles. The design varies according to the building materials available locally, the climate, and the financial circumstances of Jehovah’s Witnesses in the area. Some buildings are constructed from brick, wood, and stone. Others might be open-sided structures, with bamboo walls and thatched roofs.

Visitors are always welcome to attend meetings at any Kingdom Hall. (Hebrews 10:25) In fact, a public meeting is held each week, focusing on a Bible-based theme that is of interest both to regular members of the congregation and to visitors. Why not visit the Kingdom Hall in your community? (Read the Full Article.) 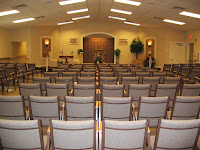 Why Do Jehovah's Witnesses Dress Up for Their Meetings? (JW.ORG)

Posted by Elijah Daniels at 4:36 PM