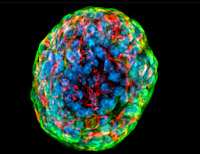 Since stem cells are not blood, Witnesses leave their use up to the individuals’ conscience. Witnesses would have a problem if the stem cells were obtained by killing a fetus:

The *doctrinal* position for all Christians is explicit in the Bible: We must abstain from blood just as we avoid fornication and idolatry (Ac.15:20; 21:25).

The Bible's requirements regarding blood and what parts are acceptable for Christians is NOT complicated. We only have to ask ourselves the two questions: Is it "blood" and is it still part of my circulatory system? Christians must use explicit biblical principles as well as implied indications from God's own actions in order to determine if fractions derived from blood are included in the blood prohibition.

For example, Gray's Anatomy says: "Blood consists of a fluid medium called the plasma in which are suspended minute structures called the formed elements of the blood. The formed elements include (1) the red blood corpuscles (RBC), (2) the white blood cells (WBC), and (3) the platelets."-pg 727

So, "blood" is naturally and logically differentiated by its four primary components. Therefore the Witnesses' distinction is not unreasonable.

Logically, as blood is broken down, at some point the components logically cease to be blood. If this logic was not correct then EVERY molecule which had ever been part of blood would still be considered blood and could not be ingested to eternity. Such a view would be unreasonable and completely illogical.

We can illustrate this with someone who used blood products to fertilize their fruit trees. Now, would it be hypocritical to buy and eat the fruit just because it contains some of the molecules from the blood? That would be unreasonable and completely illogical.

One reason most Witnesses accept blood fractions is because most of them are the product of destroying blood. The Bible's command is to destroy or "pour onto the ground" blood which has been removed from the body. In the case of most fractions the blood is essentially destroyed and will never be blood again. Therefore the Bible's mandate is carried out. Fractions are not blood when they are a product of destroying blood.

In the case of some larger fractions such as Cryosupernatant or Cryoprecipitate where the process does not necessarily completely destroy blood and may allow reconstitution other facts are considered. Since God has allowed proteins such as found in Cryo to be transferred from the blood stream of mother to the fetus some individual JWs view this as an indication that Cryo is not included in the prohibition of blood. But, other Witnesses may refuse for various reasons such as the fact that some fractions "may be so similar to the function of the whole component and carry on such a life-sustaining role in the body."--w6/15/04; 23-24

Because the issue is a *moral* issue involving obedience to God, Witnesses make every reasonable effort to avoid disobeying. So they follow the well known *moral* principle described as abiding by the "spirit of the Law" which is universally recognized as being logical. This principle applies a specific law to other unspecified circumstances.

As an organization JWs have determined that the four primary components can still be viewed as "blood" on a *moral* and *representational* level. Each primary component individually can still represent basically what blood as a whole symbolizes: the life of the creature." They definitely act and function so much like blood that they must be *morally* included in the prohibition. This demarcation is not unreasonable but is supported by logic, scientific, medical, and legal definitions. More importantly their view keeps them *morally* clean in God's sight.

SOURCE: This is an answer provided by BAR-ANERGES to a question at Yahoo Answers.