Does Job 1:4 Refer to Birthdays? 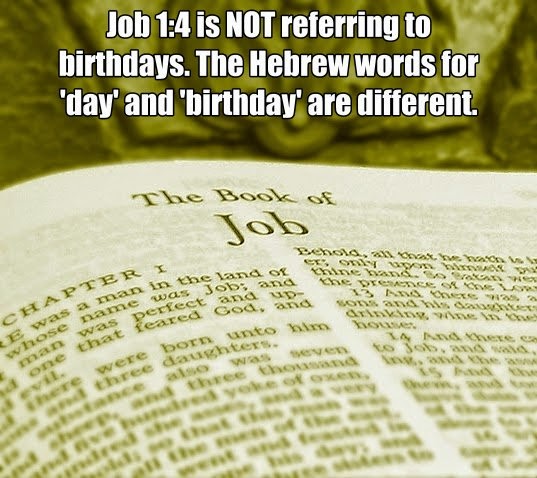 Some have made the erroneous claim that birthdays are written in the Bible as having been an acceptable practice. They cite Job 1:4 as an example. Job 1:4 reads:

“Each of his [Job’s] sons would hold a banquet at his house on his own set day. They would invite their three sisters to eat and drink with them.” NWT

But does Job 1:4 really apply to birthdays?

“Day” in Job 1:4 translates the Hebrew word yohm and refers to a period of time from sunrise to sunset. On the other hand, “birthday” is a compound of the two Hebrew words yohm (day) and hul·le´dheth. The distinction between “day” and one’s birthday may be noted in Genesis 40:20, where both expressions appear: “Now on the third day [yohm] it turned out to be Pharaoh’s birthday [literally, “the day (yohm) of the birth (hul·le´dheth) of Pharaoh”].” - it-1 p. 319; Watchtower Online Library)

At Job 1:4, hullédeth does not appear; only yowm is used in the Hebrew text. So it speaks of Job’s sons’ doing something “on his own set day,” not ‘each one on his own birthday.’ (Click on 'day' at Job 1:4; BibleStudyTools.com.)

So it is certain that Job 1:4 does not refer to a birthday, as is unquestionably the case at Genesis 40:20. It would seem that Job’s seven sons held a family gathering (possibly a spring or harvest festival) and as the feasting made the week-long circuit, each son hosted the banquet in his own house “on his own set day.”

The Bible makes direct reference to only two birthday celebrations, those of Pharaoh of Egypt (18th century B.C.E.) and Herod Antipas (1st century C.E.). These accounts were not depicted in the Bible in a favorable light. These birthdays were celebrated by people who clearly did not worship God and both accounts were marked with great feasting and granting of favors and both are remembered for executions: the hanging of Pharaoh’s chief baker in the first instance, the beheading of John the Baptizer in the latter.

So it would be good to consider that even if the account at Job 1:4 were talking about his son's birthdays, the Scripture does not mention Job attending. In fact, Job prayed for them and said that they may have "sinned and have cursed God in their heart." (Job 1:5) In addition, they all died on one of the occasions, so even if it was a birthday celebration, we would then have three birthday accounts of which were marked by people dying. Hardly a stellar record.

What is the Origin of Popular Customs Associated With Birthday Celebrations? (Defend Jehovah's Witnesses)

Did Jesus Want His Birthday Celebrated? Did His Followers Celebrate It? (Defend Jehovah's Witnesses)

What Happened At The Only Two Instances In The Bible That Reference Birthdays? (Defend Jehovah's Witnesses)

Posted by Elijah Daniels at 5:33 PM